This year's 'Art in Bloom' flower and art show at the Rockettopia Town Library was a bit under par this year, as it resulted in three severed hands, two missing children, and one guy losing a body part he refuses to talk about.

The problem began when the Rockettopia Flower Club, which normally arranges the flowers accompanying the art were somehow persuaded to allow the RHS Ecology Club to help. The Ecology club added many exotic plants to the arrangement, but this resulted in some unintended consequences. A library janitor was reported missing. One display was found shredded by unknown forces, with nothing but a plant display nearby. When the exhibition opened, the reason for the strange events was explained: Some of the ecology club plants were 'overly friendly' 'flesh-eating monsters' carnivorous. The plants included six Venus flytraps, eight pitcher plants*, twenty-three sundews, and one plant that no-one would get close enough to identify.

Although the Ecology Club had been accused of "feeding toddlers to Venus Flytraps" in connection with the incident, they insist that "The plants are only dangerous if you get within three feet of them, so really, if you get hurt, it's your own fault." Most are not satisfied with this explanation, and the Vegetarian Club has said it plans to get revenge by feeding Venus Flytraps to toddlers.

The Rockettopia Garden Club insists that coming to view Art in Bloom tomorrow will be 'perfectly safe'. 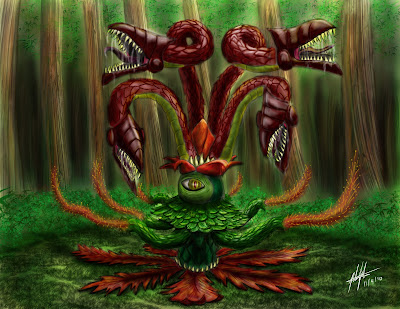 You know you wouldn't get close either
*By pitcher plant, we do not mean a plant shaped like a water pitcher, we mean a plant that pitches globs of acidic sap at helpless passers-by.